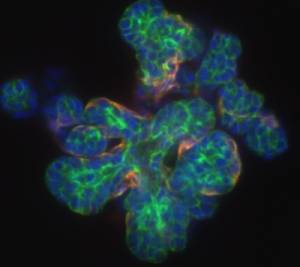 The Department of Cell Biology was founded by the histologist and embryologist, Franklin Paine Mall, who is credited as being one of the first anatomists in the country to foster an experimental approach that investigated the relation of structure and function. The Department of Anatomy evolved through three subsequent directors: Lewis Weed (1917-1948), Allan Grafflin (1948-1956), and David Bodian (1956-1977). Faculty in the Department fostered the emerging disciplines of Cytology, Histology, Embryology, and Developmental Physiology, contributing to the understanding of the structural units of organs, the development and physiology of blood vessels and lymphatics as well as cerebrospinal fluid and the meninges, the anatomy and physiology of the female reproductive system, and the cells of blood and connective tissue. Bodian was a key figure in the development of the polio vaccine.  When Thomas Pollard succeeded Bodian in 1977, he recognized the Faculty’s broadening work on biological structure and requested that the name of the Department be changed to Cell Biology and Anatomy. After Pollard’s departure in 1996, Ann Hubbard served as Interim Director. In 2000, Peter Devreotes was appointed Director of Cell Biology and Anatomy. The Department regrouped to focus on molecular and genetic approaches to cell biology and in 2001, it was re-named the Department of Cell Biology.

Many key discoveries in cell biology have been made in the Department, including the development of tissue culture, the first visualization of the poliovirus, and descriptions of microfilament dynamics, organelle maintenance, cell and tissue polarity and migration, and aspects of organ formation. The Department lists many distinguished alumni, including female pioneers, Florence Sabin and Elizabeth Hay.

Men and women in the present day Department of Cell Biology participate in a virtual revolution in cell and developmental biology. Advances in Molecular Biology, Microscopy, and Computing make it possible to obtain high-resolution molecular structures and to record three-dimensional time-lapse video images of proteins in living cells and embryos. Scientists in the Department apply these approaches to elucidate the basic mechanisms of protein trafficking and secretion, organelle inheritance, cellular metabolism, cell polarity and directed motility, cell adhesion, and the organization of cells in tissues. These cell biological approaches are instrumental in sorting out the functions of the genes that comprise the human genome. These fundamental aspects of cellular and multicellular behavior underlie human embryonic development and adult physiology. An understanding of these processes enables new strategies for treatments of heart disease, aging disorders, cancer, and other human ailments.

The Department has a distinguished record in medical and graduate student training. Faculty members organize and teach courses in Molecular and Cellular Biology, Developmental Biology, Imaging, and Histology. The Department’s graduate students have made key scientific contributions and many graduates have developed into leaders in biomedical research in academia as well as industrial settings throughout the world.