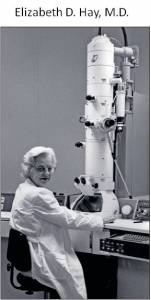 The Isaac Morris Hay and Lucille Elizabeth Hay Professorship in Embryology is the bequest of Elizabeth Dexter Hay to the Johns Hopkins University School of Medicine Department of Cell Biology. As a leader in academic medicine and recipient of a named professorship at Harvard, Dr. Hay understood the profound and far-reaching effects of endowed support for biomedical scientists. Dr. Hay’s gift honoring her parents, Dr. Isaac Hay and his wife, Lucille, also will be a living memorial to Dr. Elizabeth Hay through the teaching, mentoring, and discoveries of the generations of Johns Hopkins science leaders who will hold the Hay Professorship in Embryology.

Elizabeth Hay was born on April 2, 1927 in St. Augustine, Florida. She grew up in Melbourne, Florida with her twin brother, John, and her younger sister, Katherine. The family moved to Melbourne when the twins were toddlers, as her father, Dr. Isaac M. Hay, a surgeon, founded the first local hospital and operating theater there in 1930. Her mother, Lucille Elizabeth Hay, worked in the hospital in many capacities.

Ms. Hay attended Smith College and, immediately, fell in love with the academic environment there. She ran the weekly newspaper, was house president, and was a member of the riding team. She had an early interest in visual arts and started Smith with aspirations to be an artist. During a biology course with S. Meryl Rose, she resolved to pursue science instead of art and followed Professor Rose’s advice to get a medical degree to open up career horizons. Dr. Rose remained a lifelong friend and colleague. Ms. Hay graduated summa cum laude from Smith in 1948 and received her medical degree at Johns Hopkins University School of Medicine in 1952, one of only four women in the class.

In the mid-1950s, Dr. Hay was a pioneer in the use of the higher resolution electron microscope, a new tool in cell biology research, and she became a renowned expert in the developing field of cell biology. Beginning first at Johns Hopkins School of Medicine, then at Cornell Medical School and finally at Harvard Medical School, Dr. Hay concentrated on cell proliferation and migration. This work led to her greatest scientific contribution, understanding the extracellular matrix or ECM, a complex structure that surrounds and supports the cell and is often referred to as “connective tissue.” She was the first to show that the ECM plays a vital role in determining cell behaviors, including cell shape, cell-to-cell signaling, wound repair cell adhesion, and tissue function. Most recently, she elucidated many of the mechanisms involved in the switch of cellular behavior coined the “epithelial-mesenchymal transformation.” 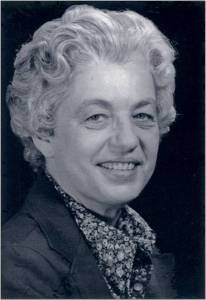 At Harvard Medical School, Dr. Hay was named the Louise Foote Pfeiffer Professor of Embryology in 1969 and, in 1975, became chair of the Department of Anatomy and Cell Biology. She was the first woman to head a preclinical department at Harvard Medical School and she held this position for 18 years. She was the first woman elected President of the American Society of Cell Biology and the Society for Developmental Biology, as well as the first woman to receive the Conklin Medal in Developmental Biology. She was the second woman president of the American Association of Anatomists (AAA) from 1981-1982.

Dr. Hay held a number of honorary degrees and won over 20 national and international awards. She was elected to the National Academy of Sciences in the cellular and developmental biology section in 1984. She was awarded the E.B. Wilson Medal from the American Society of Cell Biology in 1988. In 1992, she was awarded the highest AAA honor, the Henry Gray Award. She continued to teach and work on grant-funded research until 2005.

Dr. Hay took great pleasure in developing the careers of young post-doctoral fellows, graduate and medical students, and junior faculty at Harvard Medical School. As a mentor, she readily shared her access to top scientists with students she would bring along to exclusive parties, lectures, and awards ceremonies. By example, she also inspired students to question the greatest minds in the field. Her regular chili dinners for students and staff, and Friday afternoon “TGIF” get-togethers were an institution in the Department. In 2002, her colleagues organized a 75th birthday celebration that included academic presentations and personal tributes that drew over 100 colleagues, friends, and family.

Dr. Hay had many interests outside of her work. She was a lifelong lover of cats, maintained extensive gardens on her property, and was a connoisseur of wild mushrooms that she would identify on hiking trips, where she was often accompanied by family, friends, and colleagues. 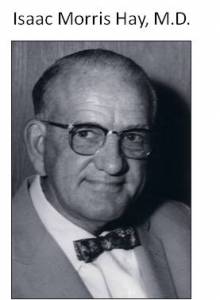 Issac Morris Hay was born August 19, 1899 in Somonauk, Illinois. He graduated from the University of Illinois and received his medical degree at Northwestern University. He served his internship at Cook County Hospital in Chicago.

The young physician in his mid-twenties accepted a position as the Assistant Surgeon for the FEC railroad company in St. Augustine, Florida in 1924. While there, he met and married Lucille Elizabeth Lynn. They had three children: a set of twins, Elizabeth and John, and later another daughter, Katherine.

Farther down the east coast of Florida, another community was coming to life and had an urgent need for a hospital: the nearest surgery at that time was 90 miles away in Daytona. Dr. Hay was persuaded to come to Melbourne in 1928 and to establish a hospital. Within a few years, the community had grown considerably and so had its needs. In the mid 1930’s, Dr. Hay was active in establishing a newer and bigger facility known as the Brevard County Hospital.

Dr. Hay served in the Medical Corps in World War II and was Chief of Surgery in the field hospitals in New Guinea and the Philippines. For his tour of duty in World War II, Dr. Hay was awarded the Bronze Star for Valor and other medals.  After World War II, he returned to the Melbourne community where he continued his private practice until the time of his death in 1965. 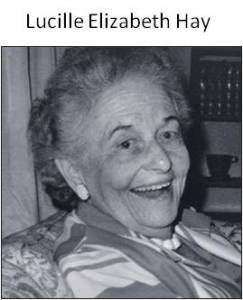 Lucille Elizabeth Hay was born September 3, 1903 in St Augustine, Florida. She graduated from St. Joseph’s Academy in St. Augustine and Eton Brunette Business College in Baltimore. In 1928, she moved with her husband to Melbourne, Florida to establish the first hospital in that area. She also had an active role in setting up the hospital. She was the dietician, the head cook, and a floor nurse. She used her bridal silver and china to set the trays for the patients’ meals.

When the new Brevard Hospital was established in 1937, Mrs. Hay became a full time homemaker. She also found time to participate as a member of the hospital guild. She was a devoted member of Holy Trinity Episcopal Church in Melbourne. She was a champion golf player, winning many tournaments. She also loved horse riding in her youth and a good game of bridge. She led a full active life until she died in 1989. 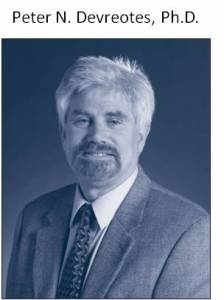 Dr. Devreotes’ research focuses on understanding how cells sense their surroundings and move towards chemical stimuli, a phenomenon called chemotaxis. This fundamental behavior of cells is critical for health and disease. For example, as an embryo is formed, its cells divide, migrate to specific sites, and develop unique characteristics. Chemotaxis allows the cells to seek and maintain their correct positions in relation to each other. In cancer, which to some extent recapitulates embryogenesis, cells lose their normal spatial relationships and begin to wander to distant sites.

Dr. Devreotes’ pioneering studies have provided the most definitive molecular analysis of chemotaxis. He was the first to identify chemoattractant receptors and to visualize their activation in living cells. His discovery that selected signaling events occur at the cell’s leading edge unveiled a strategy that cells use to sense the direction of spatial gradients. His group is currently pursuing further understanding of chemotaxis.

Dr. Devreotes is recognized internationally as the leader in his field. In 2005, he was elected into the National Academy of Science for his research achievements. He also has been an American Heart Association Established Investigator, an American Cancer Society Junior Faculty Research Awardee, and a Damon Runyon Cancer Fund Fellow. He has been an Elected Council Member of the American Society for Cell Biology and Associate Editor for Molecular Biology of the Cell. He currently serves on the Advisory Boards of the Cell Migration Consortium and the Searle Scholar Program. He also has several ongoing awards from the National Institutes of Health, including one grant that is funded through its 36th year.

In addition to his research, teaching, and administrative roles, Dr. Devreotes is a much sought-after speaker, having presented over 250 invited lectures, including plenary or keynote lectures at major international conferences. He was Founder and Chair of the first Gordon Conference on “Gradient Sensing and Directed Cell Migration” in 2005. He is the author of more than 222 research articles, reviews and book chapters, and has trained over 45 pre- and post-doctoral fellows.

Dr. Devreotes is married to Aline Sanseau Devreotes, a nurse at Johns Hopkins Hospital. She finds time to contribute meals to Our Daily Bread and volunteer to maintain Cromwell Valley Park. They live close to nature near the Loch Raven Watershed and enjoy adventure travel, home renovation, boating, and trips to Chincoteague Island, Virginia.

PHILANTHROPY AND THE BASIC BIOMEDICAL SCIENCES AT JOHNS HOPKINS

We celebrate Dr. Elizabeth Hay’s generosity and her foresight in bequeathing an endowed professorship to the Johns Hopkins School of Medicine Department of Cell Biology. An honored alumna, an acknowledged leader in science and education, Dr. Hay also is a cherished benefactor whose gift will be used in perpetuity to support a leading researcher in embryology.

As Dr. Hay knew, virtually every major medical breakthrough derives from seminal discoveries in basic science laboratories, achieved because a biomedical scientist unraveled one more mystery of biology. Private philanthropy, such as Dr. Hay’s, is our hope for the future of discovery. From seed grants to endowments, gifts to underwrite the creative work of basic scientists at Johns Hopkins have a tremendous impact. Only private philanthropy can support the high-risk and potentially high- yield work done by young scientists, or support new and untested directions for established scientists. Philanthropic support has never been more critically important than it is today, nor has the potential return on investment ever been greater. Johns Hopkins and the Department of Cell Biology welcome Dr. Hay’s Family to our family of donors.