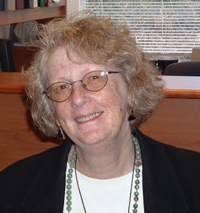 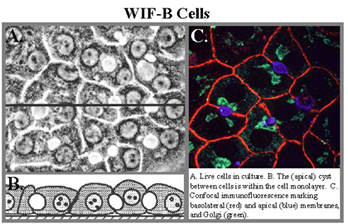 Epithelia are an important tissue type in the body, because they form selective barriers between the external and internal environments. Of the many types of polarized epithelia, we have focused on liver hepatocytes, which exhibit a complex polygonal polarity, and simple columnar cells of the intestine. Our earlier goals were to define the pathways and mechanisms by which newly-synthesized apical membrane proteins reached their destination. Important to these studies was our development and characterization of a polarized hepatic cell line, called WIF-B, which is now being used widely. The topic that we are now working on is copper homeostasis and the trafficking of membrane copper-transporting ATPases in polarized cells. 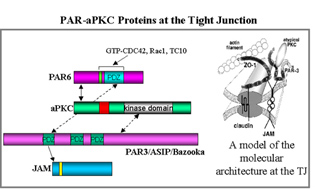 Copper is an essential cofactor for enzymes involved in diverse cellular processes, including oxidative metabolism, neurotransmitter synthesis, free radical detoxification, and iron uptake. Because of its redox postential, copper is also toxic; therefore, its levels and cellular activiteis are tightly regulated. Among the proteins known to be important in the regulation of copper levels in epithelial cells are two Cu(I)-transporting membrane ATPases, ATP7A (Menkes protein) and ATP7B (Wilson protein). They share ~60% amino acid identity. Menkes protein is widely distributed (eg, intestine, connective tissue, brain), whereas Wilson is expressed predominantly in the liver. These ATPases transport Cu(I) across a membrane from the cytoplasm to an “outside” space; they also sense copper levels in the cytoplasm. 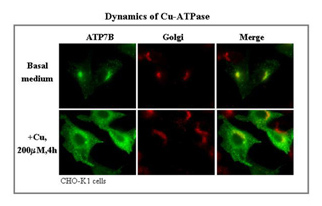 The question is: “How does copper get exported from the cell?” We have also traced the pathway taken by endogenous ATP7B in liver. It also remains largely intracellular but in vesicles just underneath the apical membrane. By tagging wild type and mutant constructs of ATP7B with Green Fluorescent Protein (GFP), we have followed the copper-dependent dynamics of the protein in polarized WIF-B cells. We recently identified an apical targeting signal in the N-terminus of ATP7B that is necessary for the protein’s copper-sensitive trafficking. Our work has implications for two human genetic diseases, which are caused by mutations in the ATP7B and ATP7A genes and lead to copper overload in the liver (Wilson Disease), due to the failure to excrete copper into the bile, and copper deficiency in many organs (Menkes Disease), due to the failure to deliver intestinal copper to the blood.