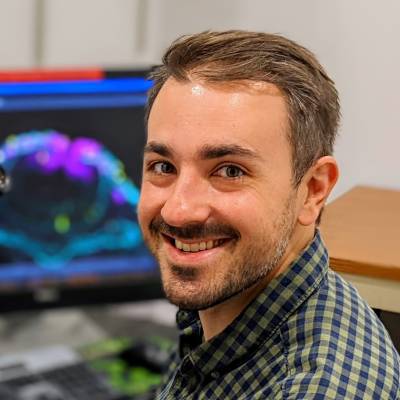 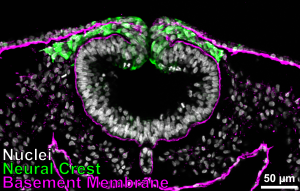 Epithelial-to-mesenchymal transition, or EMT, is a major cellular lifestyle change that produces highly invasive cells with the ability to migrate long distances in the body. This process is critical for normal embryonic development and the formation of many organs. However, EMT programs are often reactivated in disease states such as cancer metastasis. We use the chicken neural crest as a tractable model system to study the mechanisms that regulate EMT and cell migration. The neural crest is an embryonic stem cell population with remarkable multipotency and migratory ability enabling it to contribute to diverse organ systems including the craniofacial skeleton and the peripheral nervous system. Thus, insights gained from studying neural crest cells have the potential to inform novel therapeutic approaches to combat both congenital disorders and metastatic diseases.

We are beginning to appreciate that EMT is often punctuated by changes in expression of diverse lipid metabolizing enzymes raising the question: what is the function of lipid metabolism during EMT? To date, we have determined that the production of the membrane lipid ceramide by the enzyme nSMase2 is necessary for neural crest EMT. Our work shows that ceramide production in the neural crest is necessary for endocytosis which promotes cell signaling, transcriptional regulation, de-adhesion and delamination. Using transcriptomics, reporter constructs, and gene editing, we are now deciphering how different lipid metabolizing genes are transcriptionally regulated across embryonic space and time.

Changing lipid metabolism has the potential to modulate the biophysical properties of the plasma membrane. We are interested in studying how temporally controlled lipid metabolism alters membrane properties such as fluidity/rigidity as well as lateral organization of proteins/lipids, and ultimately how this regulates cell signaling and behavior. Toward this goal, we have found that ceramide production by nSMase2 increases plasma membrane fluidity to influence directional neural crest migration.

We are building a team of enthusiastic scientists who are 1) eager to uncover the mechanisms by which membrane organization governs cell invasion during development and 2) excited to work together in cultivating a welcoming, inclusive, respectful, and engaging research environment.

Ongoing projects in the lab seek to understand how: