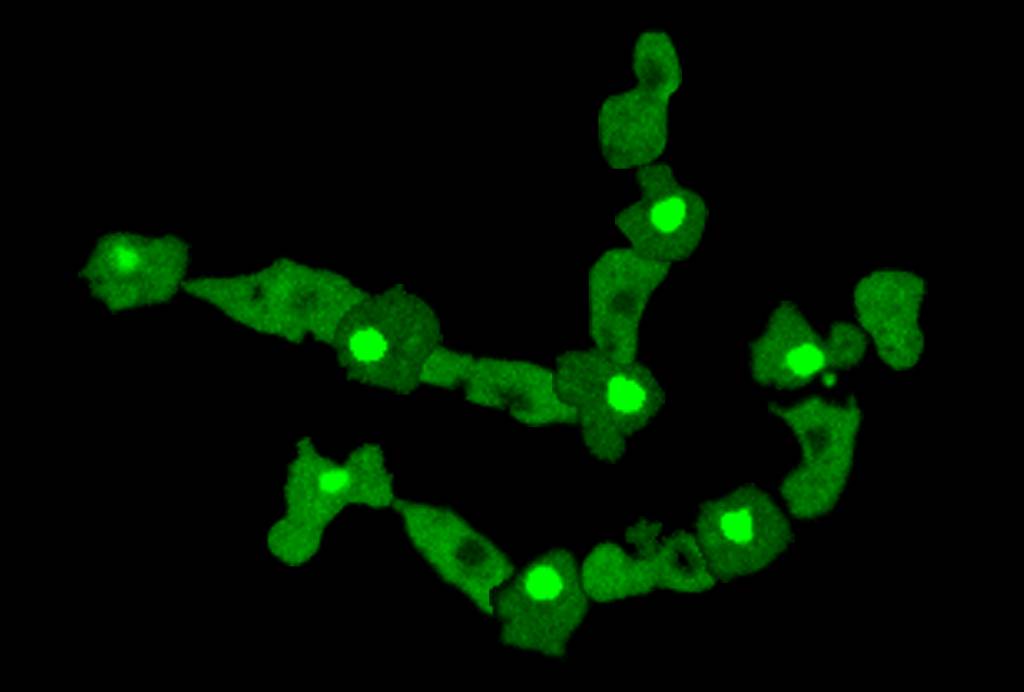 Biological oscillations are universally found in nature and are critical at many levels of cellular organization. In the model organism we study, the social amoeba Dictyostelium discoideum, starvation-triggered cell-cell aggregation and developmental morphogenesis are orchestrated by periodic extracellular cAMP waves, which provide both gradients for chemotactic migration and signals for development. Repeated occupancy of the G protein–coupled cAMP receptors promotes optimal developmental gene expression, whereas continuous stimulation suppresses the program. Although this phenomenon was recognized nearly 40 years ago, the underlying mechanism for such a stimulus-response pattern has not been elucidated.

We reasoned that the mechanism decoding oscillatory stimuli might be traced to a receptor-mediated regulation of a gene that is required for developmental progression. In a genetic screen for mutants that affect development, we discover a GATA family transcription factor, GtaC, which is essential for this process. Furthermore, GtaC exhibits rapid nucleocytoplasmic shuttling in response to cAMP waves. This behavior requires coordinated action of a nuclear localization signal and reversible receptor-mediated phosphorylation. Although both are required for developmental gene expression, receptor occupancy promotes nuclear exit of GtaC, which leads to a transient burst of transcription at each cAMP cycle. We demonstrate that this biological circuit filters out high-frequency signals and counts those admitted, thereby enabling cells to modulate gene expression according to the dynamic pattern of the external stimuli.

Tuning transcription to the number rather than the level of the external stimuli allows large populations of Dictyostelium cells over an expanded territory to be developmentally synchronized. Similar mechanisms may operate in other circumstances where cellular plasticity is linked to repeated experience.

Caption: The image shows the tracks from confocal microscopy images of four cells expressing GFP-GtaC (frames at 3.5-min intervals were processed and overlaid). Driven by periodic waves of cAMP, GFP-GtaC repeatedly shuttles between the nucleus and the cytoplasm. This highly regulated process leads to a transient burst of transcription each time GtaC travels into the nucleus. Hence the cells are able to count the number of repeated stimuli, they experience and modulate gene expression accordingly.