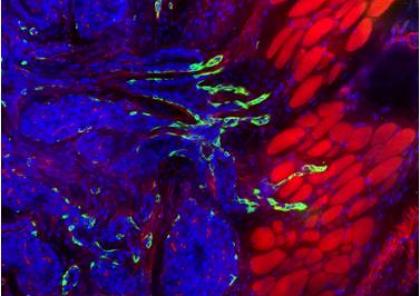 Research in the Ewald laboratory starts from a simple question: which cells in a breast tumor are the most dangerous to the patient and most responsible for metastatic disease? To answer this question, we developed novel 3D culture assays to allow real-time analysis of invasion. Briefly, we use enzymatic digestion to isolate thousands of “tumor organoids” from each primary tumor. Each organoid is composed of 200-500 epithelial cancer cells and reflects the cellular heterogeneity of the primary tumor. Tumor organoids are explanted into collagen I gels to model the collective invasion of breast tumors in the mammary stroma.

The most important conclusion from our laboratory studies is that proliferation and invasion are driven by phenotypically distinct populations of cancer cells within the tumor. Collective invasion is led by cells with a basal molecular phenotype (e.g. cytokeratin-14+ (K14+)) across mouse models of three different molecular subtypes of breast cancer: luminal B, Her2+, and basal breast cancer. We observed functional specialization of cancer cells into proliferative, non-invasive (K8+K14-) and non-proliferative, highly invasive (K8+K14+) phenotypes. K8+K14+ cancer cells led collective invasion and dissemination in 3D culture and in vivo in mouse models. We next demonstrated that this same basal molecular signature characterized the most invasive cells in 3D cultures of primary human breast tumors. Importantly, we used molecular biosensors to observe phenotypic conversion between proliferative and invasive states following induction of basal epithelial markers. Finally, we used lentiviral shRNA to demonstrate that inhibition of basal epithelial genes (e.g. K14) blocked collective invasion in 3D culture and in vivo. The manuscript describing our results was recently published in Cell (December 2013). Our data reveal that K14+ cancer cells play a central role in metastatic disease and suggest that the development of clinical strategies targeting these cells will provide novel breast cancer treatments.